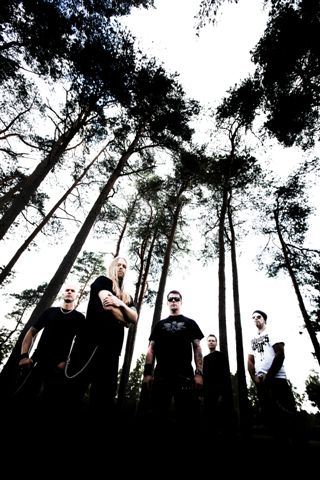 Only a few months ago Century Mredia released the early works of the Swedish death metal troops known as  Evocation. The band themselves, however were in the mean while working on new material for their fourth album, ‘Illusions of Grandeur’. Guitar  shredder Vesa Kenttäkumpu brings us up to date.

After a series of some very good demos you called it a day in 1993. What made you give up the band and what brought about your eventual reunion more than a decade later?

We gave up Evocation because of musical disagreements, we had a period that all in the band listened and took inspiration from almost everything. We tried to do a couple of songs but the music we did was just crap so we decided to quit instead.

It was not the plan to start Evocation again, it just happened over a couple beers. We had talked about to start the band several times when we where drinking together but we did not have the drive to do it.

Then one day I talked to Marko and we decided to send out the old demos to record companies. We just wanted to check if they’re any chances to let the demos out on the market. The company named Merciless record witch is a underground label, decided to let the demos out. We got lots of good reviews on that album so we just sad to each other that lets give it a try. We started to rehearse again 2005. So here we are now, 4 albums after.

After your reformation in 2005 Tjombe abandoned the bass to concentrate on the vocals? What prompted this decision?

It just happened naturally, we wanted to have a bass player that only played bass so Tjompe could concentrate on vocals only. We had no particular thoughts about it.

For the new album you have a new bass player, Gustaf Jorde, formerly from Defleshed?

Gustaf has been a friend to the band a long time and he liked all the albums we had done. He has also done a guest appearance on the “Tales from the tomb” album on the song “Veils where blown”, so to ask him if he wanted to play bass for us was obvious.

I’m actually reading the ‘History of Swedish Death Metal” by Daniel Ekeroth right now, a sizable volume that accounts the early years of the scene which you were also part of. Are you familiar with this book?

Yes, I have the book and it is really good and interesting. There is lots of good stuff in it that took place on the early death metal scene and it is a nostalgia trip to read it. I think Daniel has found a good portion of everything that happen those days, I love the book.

Your new work is still firmly rooted in the old Swedish school of death metal. What still captivates you in this music after so long?

We like the tunes we do and I think when you start to do music it will always be in a certain way. Especially when we are 3 guys, me (Vesa), Marko and Janne in the band that are doing music and myself who is doing almost every song. That’s why it will always sound like Evocation. And the songs we are going to do in the future will be the same but only with small twists in it.

Do you have any plans to revisit your Cemetary days as the band is unjustly more or less forgotten today?

No, I have no plans to start up something else.

Earlier this year you’ve also released all your early work from the nineties. How do you look back on those early recordings 20 years later?

I think the recording of our first demo-tape “The ancient gate” was the best memorable recording of all my life. We where so young and expectant on the whole music business and the recording we did in the legendary “Sunlight studios” with Tomas Skogsberg behind the wheels, if you summarize it all, “It was just cool!!”

The second tape, our “Promo” was fun to do but on that recording everything went wrong. The producer who had the studio had never recorded a metal band before, he had only recorded Swedish dance music with lots of reverb on it. And a really funny thing happened when the producer did the mixdown on the songs. All in the band wanted more of the kick drum in the mix and the only thing the producer said was, “THAT DOS NOT WORK, THE KICK DRUM IS TOO LOUD AND IT IS IN THE RED AREA, OVER 0 DB”, and here we are talking about a analog mixingdesk. So when the producer sneak out for a cup of coffee in the kitchen, we ran to the mixingdesk to bring up the kick drums, hehe and he did not noticed it at all.

Any chance we will go to see you soon on a Belgian stage?

I hope so and we would love to do it. Maybe next year if we are doing a European tour, then we are coming to Belgian I promise you.

If you guys think “Illusions of grandeur” is a good album, wait until you here the next album, that´s going to crush you!!