Warning: imagecreatefromstring(): Passed data is not in 'JPEG' format in /home/u38988p34483/domains/darkview.be/public_html/plugins/content/multithumb/multithumb.php on line 1542

Interview Beyond All Recognition 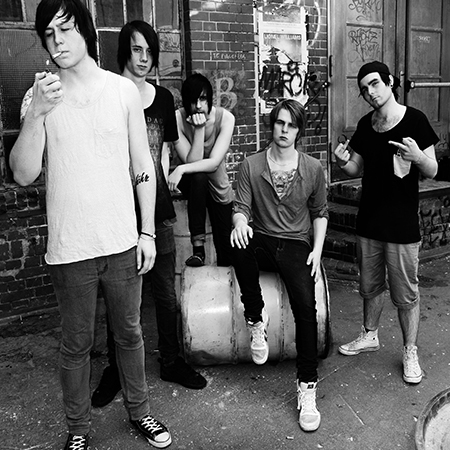 I'd like to start out with a question I ask most bands; for the people that don't know you yet, can you tell us a bit about who you are and what we can expect from your music?

Of course. We are Beyond All Recognition, Dubstep metal from Sweden. The band consists of David Söhr (vocals), David Eriksen (Rythm-Guitar), Paul Gidlöf (Lead-Guitar), Pontus Bergström Warren (bass) and finally me, Edwin Jansson (Drums). Our music is all about breaking new ground and try to evolve the music we love. The way we have chosen to achieve this is by infusing metalcore with dubstep/electro. We don’t know how our future sound will be, but this is where were at and were damn proud of it

"Drop=Dead" is your first full album. How was your experience recording it ?

Recording Drop=Dead was a amazing and fun project. Our producer (Dino Medanhodzic) and our Dubstep/Electro creator Fredrik ‘’Alexius’’ Eklund made the whole process so much easier and fun. The communication and cooperation between us all was very stable. Sure we had our problems, but we always managed to come out on top. We had alot of fun recording and we grew alot as muscicians under this period.

Can you tell us a bit about what the album is about? Where did you get your inspiration for the songs from?

The album has a lot of different messages about everything between heaven and earth, like going to a kick-ass party or feeling homocidal. Our lyrics are varied and talk about different things. The inspiration for the album comes from our own experiences and things we care about. We like to think that people will interpret the lyrics in their own ways.

Your music is a mix of metalcore and dubstep. What made you decide to mix these styles?

It’s quite simply really. We all love Metal, all kinds of metal and we all love Electro/Dubstep. So it was really just a matter of time until the idea of combining these two things we love came about. Both genres are very heavy in their own sense, but also share alot of similarites such as breakdown’ish aspects. They both have a very raw and heavy feel to them. So basically we just saw the potential and decided to give it a go.

Do you think your music will also attract people that aren't really into metalcore? Is it something you hope also appeals to the genuine dubstep crowd ?

Sure. We’ve have gotten postive feedback from dubstep fans and from metal fans. Our combination of metal and dubstep is a good way of leading people into metal or dubstep. But generally it’s ‘’metal people’’ who find us interesting and give us a proper listen

Are there any particular bands that influenced the music Beyond All Recognition brings ?

Not really, Since Dubcore still is a new fresh thing we have very little to take inspiration from except from individual dubstep or metal acts. So we’re working with unexplored territory in a way. People sometimes compare us to Korn’s (path of totality), But we disagree with that since we consider them to be different from us although they made an album with the same concept. So all in all, We create our own inspiration

You come from Sweden, which is a country known for it's many great metal bands. Does that affect you in some way? Does it make it harder for yourself or other musicians to really stand out in the genre between all these great bands?

I think being a swedish band is nothing but positive. This is a wonderful country to start a band in. It’s very easy to get started and find places to rehearse. There’s a very broad network of muscicians and companies who are all about giving new muscicians a great start in their careers. I personally think that as long as you are a highly motivated muscican with a will to succeed, things will eventually go well.

So what's next for Beyond All Recognition? Are you already writing new songs, or can we expect to see you on the road somewhere?

We are currently working on some new material in the background. But our main goal right now is to get out on the road as much as possible to promote Drop=Dead and to spread the word about Dubcore. People can defiantly expect to see us in the near future on stage in a town close by!

Finally, is there anything you'd like to say to our readers or the Belgian audience ?

Last time we played in Belgium people treated us really well and we had an awesome time! Belgium is an awesome country with awesome food and you guys can be sure to expect us very, very soon!

Thank you for you time.