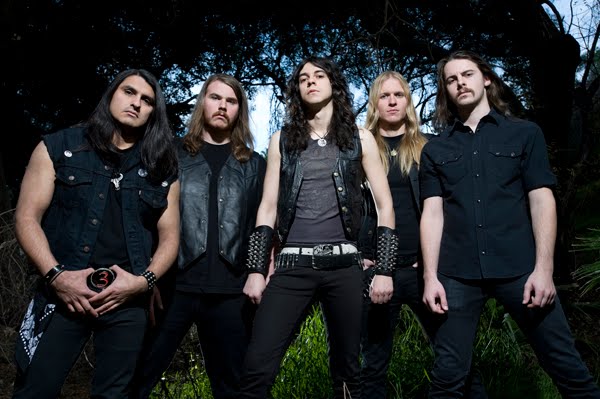 Holy Grail just released their fourth album in 4 years. And being this productive as heavy metal stars. We thought they would have time and energy left to do a little interview with our magazine. Yet only Luna was able to free some time.

Recently you signed with Nuclear Blast. How did you experience this?

This was a great thing for us, we’re very excited to be with such a strong force in Heavy Metal. I think we will finally get some attention in Europe now that we have Nuclear Blast on our side. I can’t wait for what happens in 2013.

The new cd will be released in 2013. What can we expect? Will it be in the same line of the previous Season's Bleedings EP?

Well, to answer this question correctly yes it is very much like Seasons Bleedings, however, that Ep was a covers record. I think our new cd is more like our first full length cd “crisis in utopia”  except on Ride The Void we tried to create something bigger and stronger without losing the same elements that worked well in the beginning.

You recently became a victim of theft during touring. Are the affairs already in order or is it still ongoing?

Yeah, we had really bad luck in Montreal, QC Canada but luckily nobody was hurt and we didn’t lose our gear so we were still able to play the show. Our affairs are in order for the most part, actually Vinnie Paul was very kind and bought Alex Lee a new laptop to replace the one that was stolen, Alex almost cried out of shock. Hellyeah is a great set of guys and we love them like brothers, that was so nice of them to do that.

You have toured with Blind Guardian and AmonAmarth. Are there any bands that you absolutely want to tour with?

I Personally want to tour with King Diamond/Mercyful Fate, Judas Priest, and Accept

When can we expect a tour to land in Belgium?

Right now there is talk of Summer festivals in Europe and maybe a proper European tour in the fall, but nothing is 100% yet.

Are there any side project Next to Holy Grail? Or do you stick to this occupation?

Right now there are no side projects although I have wanted to start a joke side band with Joel Grind from Toxic Holocaust, a Vegan Glam Metal band haha that would be awesome. As far as occupation goes when we’re not touring we all have to work other jobs to make ends meet.

What can we wish you for the new year of 2013? Or are all the goals already reached?

It would be great if we didn’t have to work extra jobs to pay our bills and focus purely on Holy Grail, but with the way the industry is right now and the economy being so bad I don’t know if that will ever be in our future..all we can do is keep pushing forward and Ride The Void in 2013

Any last words for the Fans/readers ?