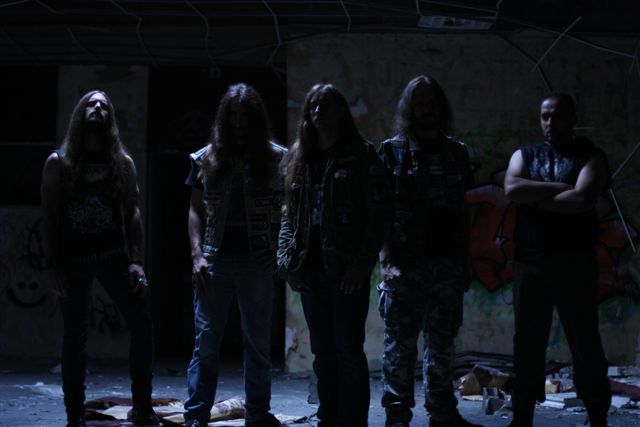 After a process as long and painstaking as the music itself,  Funeralium has finally released their second work, the double album ‘Deceived Idealism’, an occurrence Jonathan Théry  is more than willing to share with us.

It’s been a long time since your debut album. What has happened in between?

So countless shitty things that I wonder if Funeralium is cursed or something. When we started to record our debut album in 2006, I have to admit we entered a total period of chaos in the band. Between 2006 and summer 2007, we rehearsed just a few times and it was clear there was no future with that line up anylonger. Thus, our former drummer decided to leave the band in 2007 and we did a break of nearly 1 year after that. At that time, I was even asking myself if it was worth carrying on as I didn’t find back any inspiration.

Finally, around summer 2007, I found back some urge and I decided to recruit A.D. K’shon (a long friend of mine) and Asmael Lebouc to bring back some fresh air and new ideas. We started again rehearsing in a regular way and I finally found back the atmosphere required for composition. I worked on totally new songs (“deceived idealism” is one of them but the rest were given up ahah), brought them to rehearsal (that’s the way we work in the band ) and that period marked a total new orientation. Indeed, this time I didn’t want to limit myself at all and it involved new musical elements to catalyse in the Funeralium way. Besides the new members also brought new influences, new ideas.

Yet, line up issues started again in 2008 when Berserk decided to leave the band. Poky (from Mourning Dawn) replaced him as a guitar player but Toxine (former bass player) and him finally left the band months later. At that time, Charlesward was recruited as second bass player and all this frustration and anger turned out to be THE best creative vectors. Indeed, I composed 90% of “Deceived Idealism”in 1 year and a half. Finally Berserk joined back the band at the end of 2010 when I told him we needed a second guitar player for the studio recording.  We finally booked Alexis Damien studio to record the drums in December 2011 and then the Worship studio (Chris from Huata owns that studio) to record the rest, mixing and mastering the album.

With your second record do you feel like you picked up where you left of since the last record or do you see a great creative leap between the two? Personally, I feel that you’ve toned down the” extreme sick” part a bit in favour of a more varied style which certainly does the songs justice.

I think all Funeralium main ingredients are on “Deceived Idealism” so I can say that we picked up where we left the band. Funeralium is not a complete new entity. We just wanted to push beyond the musical borders  of our style. That’s why I still consider Funeralium like an extreme doom band. You must have noticed that most of our influences are rooted in the doom metal history. We just decided not to limit ourselves to “classic extreme doom”. We have many other metal influences (which are as noble as doom metal ones) and I think that was worth adding them since as you mentioned, it brings more variety, dynamic, complexity and musical richness.

As for the “extreme sick” part of our music, I don’t think it’s so toned down as “blood, phlegm and vomit” may be considered one of our sickest songs in the band history. As far as I’m concerned, I think that album is even more negative than our debut one.  And all the other members feel that way too. It was composed under such a dose of frustration and anger that you will directly find these feelings in the lyrics. As a band we definitely wanted to move towards something nastier, more spiteful. Yet, each listener may consider that aspect in a different way as it’s the kind of sensory part of our music.

What do you find so compelling about excruciatingly slow and tortured music like this?

As far as I’m concerned, as I’ve always composed in a total natural way, it’s really hard to answer that question in a precise way. Let’s say I’ve always been fascinated by doom metal (that’s my favorite metal genre), the worst sides of our everyday life and deviant human behaviors as well. Indeed, life is not always about flowers so it’s important to express in a way what we hate and can’t bear to reach a balanced  state in our mind. And trust me that when you live a big city like Paris (10 millions of people in total with its suburbs), human mass turns to be THE source of inspiration. Thus, I think playing torturous doom metal is a way for me to express my bad feelings like the way we feel like puking after swallowing shit. Of course my other comrades share these thoughts, we share these feelings of disgust and hatred.

Did you set out to release it as 2 cds or did it just turn out that way?

Nothing was planned at all. Songs were composed and after recording them, we noticed that a simple CD format wouldn’t be enough to gather all these tracks.  Of course, we could have taken off one song. Yet, it would have been not logic at all and considered like a wound. Thus, the double CD format was the only option.

There are a lot of good doom bands in France, but many of them look to be very intertwined.  There’s you, Ataraxie, Mourning Dawn, Inborn Suffering, Despond, Disjecta Membra, Remembrance, Lethian Dreams.. All of them seem to share at least one member with another. Is there such a close knit scene there?

Yes there are a lot of good bands in France. You forgot to name bands like Northwinds, Eibon, Fatum Elisum, HKY or Huata. We can say that all doom metal subgenres are now represented. “Epic doom” may be the only “underrepresented “subgenre and that’s a pity as that’s one of my favorite ones.

Did you ever consider reissuing or rerecording your demo stuff from your first K7?

Actually, it’s already scheduled hehe. We will reveal soon news about that recording...

How are things going for your other band Ataraxie? You’ll be coming to Antwerp in November together with Officium Triste? When can we expect a new album?

Things are quite active as well as we’ve just finished to compose our 3rd album. Once again, we didn’t want to repeat ourselves so don’t expect Anhédonie beta version. We chose to reduce our live activity within the last few years to focus on the composition of that new opus. Last weekend, I finished placing all vocals on new songs for example. Anyway, we’ve just planned to record our 3rd album at the beginning of next year with Chris from the Worship Studio. As for the release date, that’s too early to give you further details. Time will tell as you never know what can happen... Delays are almost inevitable!

Nonetheless, we’ve also planned that small tour at the end of November because live activity is important for us. We need to play our songs live to push the volume of our amps, feel the ground vibrating and share our music. That will also be the opportunity to play new songs live while enjoying brewed beverages from your land hehe. Officum Triste and Marche Funèbre are long time musical comrades so we’re impatient to start that tour.

With Funeralium you’re really at the extreme end of the doom spectrum, with Bethlehem as a clear influence.  A band you’ve also referenced with Ataraxie in the past on the split you did with Imindain?

Yes the first period of Bethlehem (from the debut “thy pale dominion” to SUIZID) is an influence for both bands. They were one of the first bands to propose something new by using elements taken from other genres. It can sound simple to follow the same path but it’s not at all.  That’s not because you mix lots of different good elements in your music that you will get something coherent and interesting. For example, I can’t enjoy a band like Sigh or even all post “monumension” Enslaved albums.  Yet, I’m a big fan of Ved Buens Ende, Virus and Solstafir.

Any chance we will get to see you soon on a Belgian stage with Funeralium itself?

Ideally we would like to find a booking agency, that would make things easier. We all want to play more often with Funeralium and we hope that with this new album we'll have more propositions!

“Deceived Idealism” will be soon released by Weird Truth (http://weirdtruth.jp/) in double CD and in vinyl via Ostra Records. If you want to support us, do it financially by buying albums. We’ve also just launched a new web page (http://www.funeralium.net/) so don’t hesitate to visit it if you want to get information about whatever. We also have new merchandising available for sale (TS, patches, pins) on our bandcamp page http://funeralium.bandcamp.com/